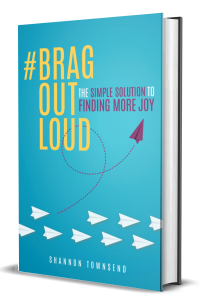 A revolutionary new way to talk about our triumphs, our struggles and how to 'brag' as a birthright, instead of seeing it as a dirty, four-letter word.

This radical 90 second practice is taking the world by storm, promising and delivering relief from burnout, playing small, and hiding from our deepest desire: more joy and less stress.

The innovative process proves you can change the world, your energy levels, and your satisfaction (even on days when you hate everything) without any extra work.

Don't miss the #1 New Release from Shannon Townsend
- it's a game changer.

If you’ve ever felt like you’re trapped and scared to live a big bold life, read this book! The simple, practical and actionable tool of bragging and celebrating is guaranteed to break the spell and wake you up to your greatness. -Jaime Drummond | Strategist

Shannon has built a movement based on something so brilliant and profoundly life-changing, yet so simply and easily implemented. It allowed me to self-validate versus waiting for validation from others, something I'd struggled with my whole life. -Julia Bernard-Thompson | Tedx Speaker

This book is a must read for anyone struggling with self - praise. I grew up with the expression "self praise is no recommendation" so learned early on to rely on external validation. This book, rightly so, turns that on its head! Self praise is the best praise there is! The book is the gentlest "how to" manual on how to get more joy, peace, happiness and all good things into our everyday lives. -Alexis Pierce | Award Winning Strategist

Shannon's done it again! This book is as easy to read as her life-changing tool is to practice. #BragOutLoud is a must-read if you want to step out of the soul crushing rat race, reclaim your inner spark, and finally feel good about who you are. It's simple, and it works.  - Rhonda Lee | Creator of Spirit Mist Smokeless Smudge

If you've ever felt like you're trapped and scared to live a big, bold life, read this book! The simple, practical, and acitoanlbe tools of bragging and celebrating are guaranteed to break the spell and wake you up to your greatness.  - Nisha Kaunda | Founder of Nisha Kaunda International

The truth of this message resonates so loud that it cannot be stopped.  It can no longer be denied. This is the new paradigm of thinking/being/doing.  An age old concept has been turned upside down and Shannon prolifically demonstrates how we can all grow into more JOY by embracing ourselves and the concept of bragging as a form of personal growth.  This IS the book you have been waiting for. You have been given permission to celebrate life and YOURSELF to the fullest. Embrace it.  - Tracy Finkel | CEO of Breathing Gratitude

In clear, comforting, and honest language, Townsend encourages us to celebrate our accomplishments, big and small, and cheer each other on.  There's no intensive, multi-day specialty diet-in 90 seconds a day, you can learn to honor yourself and support others and reclaim both community and self-appreciation in this harried existence that is modern life.  The magic here is in engaging others in your own personal development.  Want a more fulfilling, centered, balanced life? The key is the social solidarity Townsend taps into." - Tanya Cook | Sociology Professor & Researcher

Once you have your copy, come back here
and claim your free gift!

CLAIM YOUR FREE GIFT AFTER PURCHASE HERE
Purchase on Amazon

ABOUT THE AUTHOR: Shannon Townsend

In Shannon Townsend’s debut book, #BragOutLoud: the simple solution to finding more joy, she tackles the social taboo of bragging. While working as a nationally certified sign language interpreter, she found herself sick and desperately needing a career change. When the same thing started to happen again in her next dream career as an Executive Coach, she realized the problem might have more to do with how she was dealing with the demands of a “busy” obsessed culture and a distinct lack of time to acknowledge all the tiny things that make up the day. While living in Northern Colorado with her husband, Joe, and two cats, Darkrawr and Valeera, she began the arduous task of starting a not-so-secret cultural revolution. Armed with enough gumption to fail, she invited an ever-growing community to change the world with her, in as little as 90 seconds a day. Now she travels, speaking about the astounding power of #BragOutLoud, celebrating, and the radical shift that the world is craving. You can learn more about her work, the movement, and her next speaking engagement at www.BragOutLoudBook.com